Mr. Lawson gets fired from Dutch Boy by his younger brother. Afghanistan, the UN finds a town in the middle of the hot desert that has been completely frozen. US government decides to send up Gerard to troubleshoot the system rather than take it offline. ISS 4 – A person that removed a piece off a satellite was blown off the station.

Magma begins spewing hot magma across the Hong Kong, but is covered up. Mr. Lawson takes a shuttle from Cape Canaveral to go fix Dutch Boy. There are more shenanigans and Lawson finds a hard drive stuck in a panel with data that shows the sabotage showing someone is weaponizing DutchBoy, possibly the President.

There are more weather anomalies in Brasil and Japan and a Geostorm countdown begins and Station self-destruct begins. The saboteur is found on the station and is killed. The other saboteur is the Secretary of State and the President is kidnapped by Lawson’s brother and his Secret Service girlfriend.

Secretary of State, when asked why he did it,  says “the US Government is a bank disguised as a country.” He planned to take out all the other countries and pave the way to US dominance again. Lawson reboots the system with the codes from the President and shuts down the Geostorm threat.

Lawson and the Station Cmdr escape and are rescued and the planet begins to heal after the major destruction. Some say there are major planetary changes coming which might result in significant loss of life and afterwards, the healing – of both the planet and those that remain to move into 5th density.

The last line by Lawson’s daughter says “You can’t undo the past. All you can do is face what’s ahead. It (the rebuilt station) belongs to all of us now. One planet, one people. As long as we remember that we share one future, we will survive.” 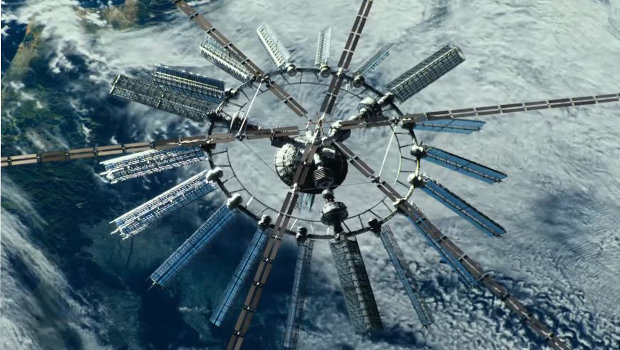